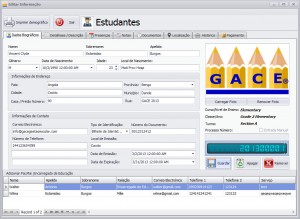 Luanda — The chairman of the Angola’s Association of Private Education, António Pacavira, Tuesday in Luanda said that the new School Management, Administration and Control software (Gace), created by Angolan António Calongo, constitutes a gain for the technological sector in Angola.

Speaking to Angop during the launch of the software, António Pacavira said schools have been run with advances of this kind but Angola lacked this type of system in a generalised way.

“The Gace software, though is not the first on the Angolan market with these functions, always proves to be innovating. At the level of school management and administration, there are other softwares in colleges and university, but they have not yet reached the management of public schools,” he said.

According to the source, the purpose of Gace is to take technological management to public schools, as a project containing some innovations, intended to optimise both time and some resources.

In his turn, speaking of his creation, Antonio Calongo said it permits a fully computerised management and a student could even ask for a statement from away, that is through Internet, including other procedures.